By Hugo Duncan for the Daily Mail

Around 8,000 tonnes of paper and cardboard have been destroyed in a blaze at a packaging plant in Birmingham.

More than 100 firefighters tackled the blaze on the Smurfit Kappa SSK paper mill within the Nechells space of town on Sunday.

The fireplace began at 7.40pm on the premises subsequent door and unfold to the mill’s yard in excessive winds. 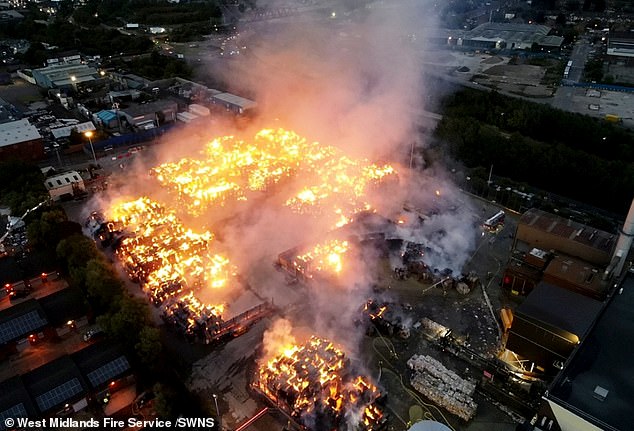 Paper loss: The enormous blaze on the Smurfit Kappa SSK paper mill in Birmingham destroyed round 8,000 tonnes of paper and cardboard

Pictures and drone footage posted by West Midlands Fire Service confirmed bales of cardboard on fireplace throughout a big space of the location, however luckily there have been no casualties.

The plant is one among two paper mills operated by Smurfit Kappa within the UK and produces 500 to 700 tonnes of packaging paper daily, which is later transformed into cardboard packing containers.

The Irish firm has the capability to provide 8.3m tonnes of paper and cardboard a yr globally and deal with greater than 7m tonnes of recovered paper for recycling.

Packaging corporations have confronted a surge in demand for his or her merchandise over the past two years, first as a result of growth in ecommerce on the peak of the Covid-19 pandemic after which from the broader restoration that adopted the reopening of economies.

Smurfit stated earlier this yr that its product vary remained successfully bought out in virtually all the 36 nations it operates in.

A spokesman for the agency stated: ‘Smurfit Kappa would like to thank both West Midlands Fire Service staff and the SSK team for their swift and professional response in controlling the fire within a few hours and ensuring the safety of all.

‘The paper mill itself is unaffected and we do not expect any material impact on production.’