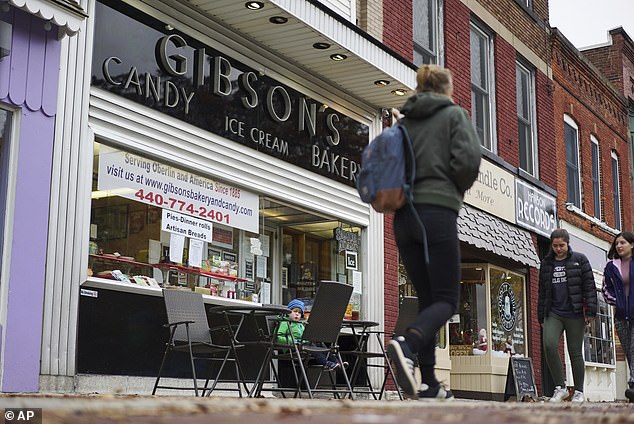 The manager of an Ohio bakery at the heart of a racism row with a nearby woke college has urged the institute to settle its multimillion dollar legal debt before the 137-year-old business goes broke and shutters for the last time.

Lorna Gibson, widow of the former owner of Gibson’s bakery, wants Oberlin College to cough up $36 million owed after losing its defamation case over a shoplifting incident at the store involving three black students in November 2016.

Her comments in an opinion article follow the Ohio Supreme Court on Tuesday saying it would not take up an appeal of a $25 million judgment against the liberal arts college in Oberlin, southwest of Cleveland.

The discredited allegations of racism over the shoplifting incident destroyed a once-thriving business, Lorna Gibson wrote. The ‘shelves are bare’, it has only a trickle of customers, staff have been laid off and the family, which is white, is deep in debt.

‘If I got the money from the college, I wouldn’t buy a house, or go on vacation, or leave Ohio. I would replace the compressors for the refrigerators and replace the fryers and proofers that we use for our dough,’ she wrote.

‘If the money doesn’t come through within the next couple of months, I’ll be forced to declare bankruptcy and shut the doors of Gibson’s for good.’

The 137-year-old Gibson’s Bakery in Oberlin, Ohio, will shutter unless nearby Oberlin College pays its multimillion dollar legal debt after losing a libel suit over false claims of racism

Allyn Gibson (right) and David Gibson (left) fought for their family’s legacy until their deaths. David Gibson died in November 2019 at age 65 and Allyn, 93, died in February 2022

Family-run Gibson’s Bakery is struggling to hold on after a woke Ohio college pushed a false narrative of racism, encouraged the community to boycott the establishment and cut its food contracts with the shop

Store owners Allyn Gibson and his son, David Gibson, both now deceased, sued Oberlin College in November 2017 claiming they had been libeled by the school and that their business had been harmed.

The suit was filed a year after David Gibson’s son, also named Allyn, chased and tackled a black male student he suspected of having stolen a bottle of wine. Two black female students who were with him intervened; all three were arrested and later pleaded guilty to misdemeanor charges.

The arrests sparked protests outside Gibson’s Bakery where flyers were handed out, some by an Oberlin College vice president and dean of students, accusing the Gibsons of a long track record of racial profiling and discrimination.

‘They called us racists on their bullhorns … college administrators were there too, handing out flyers,’ wrote Lorna Gibson, in her telling of woke campus activism landing on her doorstep in the days after Donald Trump’s election.

‘They blocked the door and screamed at customers who elbowed their way through to the counter. A few came in to record videos on their phones of our customers.’

A Student Senate resolution condemning the Gibson family was emailed to all students and was posted in a display case at a school student center, where it remained for a year.

This is one of the flyers handed out by students, encouraging others to boycott Gibson’s Bakery, later included in their libel lawsuit

‘Our world was turned upside down and has never been set right,’ Lorna Gibson wrote in the article, in which she strenuously rejects claims her family were ‘white supremacists’ who racially profiled customers.

‘Calling us racists wasn’t just wrong, it was deeply painful to our core.’

The college refused to ‘retract its baseless claims that we were racist’, protests continued, and the store was forced to lay off half its staff and cut opening hours, she added.

The boycott effectively continues to this day and freshmen nowadays are ‘brainwashed to hate us’ she added.

In June 2019, after a five-week trial, jurors awarded the Gibsons $44 million in compensatory and punitive damages. The award was later reduced to $25 million and $6 million in legal fees, but rose again in this week’s state supreme court decision after a series of appeals.

‘I still haven’t seen a penny from the school,’ wrote Lorna Gibson.

‘The college, which has about a billion dollars’ worth of assets at its disposal, still refuses to pay.’

David Gibson died in November 2019 at age 65 after battling pancreatic cancer. Bereaved Lorna Gibson said she wanted to do everything she could ‘to honor his final wish’ and ‘keep the doors open, no matter what’.

Allyn Gibson died in February, aged 93. He spent much of his eighties sitting in front of the bakery, a ‘fixture in the community’ who chatted with locals, wrote Lorna Gibson. After the protests, ‘no one would talk to him. It broke his heart’, she added.

Oberlin College told  DailyMail.com in a statement that it was ‘disappointed’ by this week’s Ohio Supreme Court decision to nix the appeal.

‘The issues raised by this case have been challenging, not only for the parties involved, but for the entire Oberlin community,’ it said.

In online posts, the college does not seek to substantiate the allegations of racism against the Gibsons, but rather distances itself from those claims, saying they were independently made by students, who are entitled to free speech.

The Gibsons were forced to downsize operations because business has significantly slowed and they will go out of business unless the college pays up. Gibson’s Bakery is pictured on Tuesday

Timeline of Gibson vs. Oberlin College

Later that evening, around 10pm, a group of students plan a protest alleging Allyn Jr racially profiled the three suspects. The students promote the protest via email.

Nov. 10, 2016: Dean of Students Meredith Ramiondo learns of the planned protest around 7am. She helps distribute a student-created flyer detailing the incident and encouraging community members to boycott Gibson’s.

Around 11am, approximately 200 students gathered outside Gibson’s Bakery in protest.  Raimondo helped lead the demonstration using a megaphone.

Later that evening, around 11.15pm the Oberlin College Student Senate notifies school officials it has passed a resolution condemning the bakery. The resolution posted in a display case at school’s student center, where it remained for a year.

Nov. 12, 2016: Counterprotests arrive in Oberlin to show their support for the Gibson family.

Nov. 14, 2016: Oberlin College suspends placing daily orders for bakery products for the dining halls. All other business arrangements with the shop are permitted to continue.

Nov. 21, 2016: Then-college President Krislov meets with David Gibson and others at the President’s House.

Jan. 23, 2017: President Krislov issues a statement to the campus community indicating that the college is resuming standing orders with the bakery.

Aug. 14, 2017:  The three students charged with shoplifting pleaded guilty to amended misdemeanor charges. The plea deal called for them to receive no jail time and to pay restitution.

June 2019: A jury awards found the school guilty of libel, due largely to evidence against Raimondo. Oberlin College was ordered to pay Gibson’s Bakery $40 million in damages, which was reduced to $25 million and $6 million in legal fees

Oct. 9, 2019: Oberlin College announces its attorneys were filing an appeal in the Gibson’s Bakery case.

March 31, 2022: The court rejects appeals by Oberlin College and upheld the judgment against the school.

April 1, 2022: The court orders Oberlin College to pay Gibson’s $33million. The college continues to contest the payout and says it is considering its options.

August 30, 2022: The Ohio Supreme Court on Tuesday said it would not take up the college’s appeal against the $25 million judgment